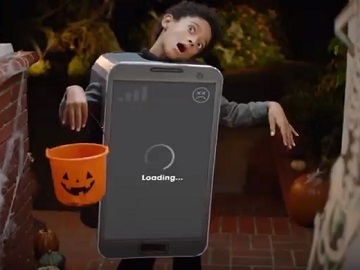 The 30-second commercial, entitled “The Slow Network Scare,” is set on Halloween and features the members of a family as they open the front door to welcome kids that go trick-or-treating and getting really scared by what they see. The mother and the daughter start screaming in terror, the two older boys are also screaming, and the father, costumed as a doctor, gets so terrified that he faints. As the ad comes to an end, it turns out the kid showing up at their door was costumed as a smartphone on a slow network.

“Beware of slow data speeds. On Boost’s super reliable, super fast nationwide network,” onscreen lines read at the end of the spot, which also sees the same boy producing a totally different reaction when he appears costume as a smartphone that’s on Boost Mobile.