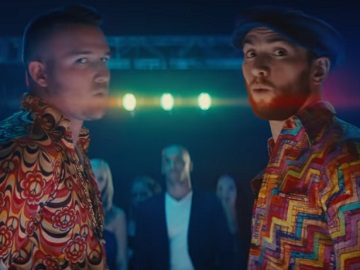 The two football stars have taken to social media their new commercial, each with different messages. Trout retweeted the brand’s new “Disco Battle” commercial, along with the message “My moves might be outdated, but my sports drink isn’t… @DrinkBODYARMOR Thanks Gatorade, we’ll take it from here. #ObsessedWithBetter.” and Andrew Luck with the following text: “Dearest mother – By now, you’ve surely been made aware of my @DrinkBODYARMOR rhythmic movement to music. Please do not be taken aback. All soldiers – even during the still times without a campaign- must unloosen with a lark. When not a hoot, I’m #obsessedwithbetter. – Andrew”.

This is only the latest installment in the brand’s “Thanks, Gatorade We’ll Take it From Here” campaign, which had Kobe Bryant as writer and co-director of the ads. A previous spot showed Donovan Mitchell using an outdated rotary phone to talk NCAA tournament picks and James Harden using an old typewriter to fill out his bracket. However, they both confirm what the voiceover says, namely they would never use outdated technology to fill out their NCAA March Madness brackets and they wouldn’t drink an outdated sports drink either.