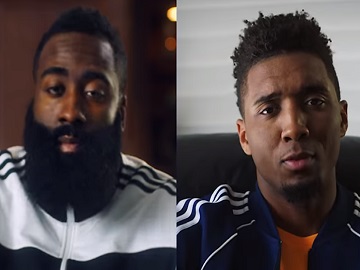 BODYARMOR has released a new commercial starring James Harden and Donovan Mitchell, highlighting that they wouldn’t use outdated technology to fill out their NCAA March Madness brackets and they wouldn’t drink an outdated sports drink either.

“Donovan Mitchell wouldn’t use an outdated rotary phone to talk NCAA tournament picks. And James Harden would never use an old typewriter to fill out his bracket,” says the voiceover on the 30-second ad, asking then “So why would they choose an outdated sports drink?” The two athletes both reply at the same time that they wouldn’t and the voiceover presents BODYARMOR as “the more natural, better sports drink”. “Thanks, Gatorade We’ll Take it From Here,” he also says at the end of the commercial.

This is not the first installment in the “Thanks, Gatorade We’ll Take it From Here” campaign featuring Harden. Last year, he starred in a spot that showed him going to the game wearing outdated fashion, a thing he would never do.

This campaign, which had Kobe Bryant as writer and co-director of the ads, also features Knicks’ Kristaps Porzingis, Angels outfielder Mike Trout and WNBA star Skylar Diggins-Smith, each doing outdated things and the voiceover mocking them for it. Porzingis is seen using a carrier pigeons to update his parents in Latvia, Trout using an outdated workout machine, and Diggins-Smith using an outdated workout plan. The thing they have in common? They all say they wouldn’t choose an outdated sports drink.