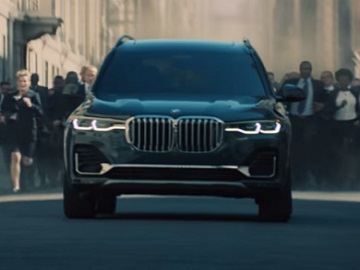 BMW USA showcases the first-ever BMW X7 in a new commercial, based on the epic poem legend of Ol’ McLanden.

“You heard the Legend of Ol’ McLanden. Battled the bulls of the bankers single-handed and evaded the waves they decide and wrangled the gangs of the docks by the dozen. McLanded beat Roy the Destroyer and brought all the Razorback Rogues to their place. McLanden braved roadways where most men won’t bother to rescue the runaways, the Headmaster’s monster. I sure would have loved to see her that fine hour and perhaps catch a glimpse at the source of her power,” the narrator (Star Trek actor Chris Pine) says on the spot, which features a BMW X7 with the name McLanden emblazoned on the license plate driving down the city streets, avoiding all kinds of obstacles and dangers (taken to epic proportions) along the way and out of the city, to a private school in the mountains, where a bunch of kids are rushing to get into the seven-seater.

Created by Goodby Silverstein & Partners and directed by MJZ director Dante Ariola, the spot also features a city worker who opens a fire hydrant as Poseidon, a giant construction worker wielding a jackhammer as Roy the Destroyer, and a gang of bikers as the Rogues of Razorback Ridge. At the end, when McLanden is revealed as a woman who was on a normal commute, from work to school, to pick up kids, and to home, the voiceover urges viewers to “Make every day legendary,” which serves as the tagline.

The commercial will air during a commercial break of the Oscars telecast, on February 24, and will also run in movie theaters and online.