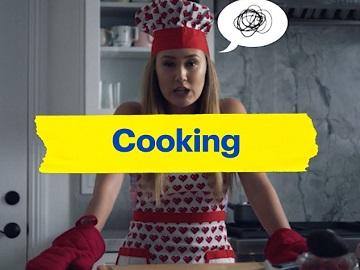 Best Buy continues to promote its student deals with a series of new ads, featuring Lauren Riihimaki, better known as LaurDIY, a Canadian YouTuber and crafter known for her YouTube channel LaurDIY.

One of the spots sees the LA-based DIY and lifestyle guru getting into the kitchen to cook, but not for long. She soon decides to give up to this activity and order pizza instead on her Lenovo and enjoying it on the sofa, in the company of her dog. “Pizza is always the move. So I hope you guys had an awesome day choosing my day,” she says, adding that she and her furry friend are going to post up and watch a movie.

Lauren also stars in a 30-second video dubbed “A day in the life of @LaurDIY,” that shows how her day is all about good-looking DIYs with the help of her equally stylish Lenovo Yoga with Intel Core i5 processor. She tells her followers that they get to choose her entire day and reveals some things about her, such as the fact that she’s literally not even human until she grabs her cup of coffee and breakfast. “Welcome to the first decision of my day,” she also says toward the end of the video, urging viewers to pick either option A or B.

Best Buy has also teamed up, for its Back to School campaign, with internet sensation Brandon Armstrong,
the man known as @BdotAdot5 on Instagram, and YouTuber Kianna Naomi. They also appear in videos showing a day in the life, that promote the retailer’s current offers, which include the chance to save up to $150 on select Chromebooks and save an extra $50 with Student Deals.