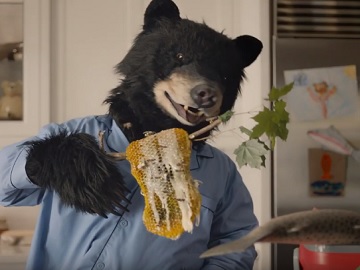 Dare Foods promotes its new Bear Paws Sandwich Cookies, described as a “new take on a classic combination with 5 grams of sugar,” in a hilarious new commercial, featuring the bear family.

The spot, titled “Lunchbox,” features the father bear telling his son what he has for lunch. As he shows the kid a big salmon which he almost drops and a honeycomb, the latter, focused on his tablet, says it’s “boring”. However, when the dad shows him a Bear Paws Sandwich Cookie manages to get his attention. “Wow, what is that?” his son asks. “It’s delicious, is what is is,” the bear answers, whispering then to his wife that this sweet treat only has 5 grams of sugar, but what he doesn’t know won’t hurt him.

Dare Foods has also promoted in the past other Bear Paws products, including the Bear Paws Crackers, made with real fruits and veggies, and My First Bear Paws, presented as “better firsts”, which are made with whole grains and less than 5g of sugar per serving, no artificial sweeteners and no artificial colours or flavours, and are available in two varieties – Oatmeal and Vanilla.