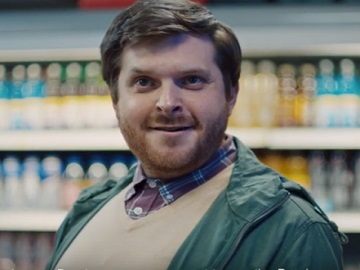 The 30-second ad opens with a man in a gas station who, after filling up the tank and grabbing a drink from the freezer, realizes he forgot the PIN for his Barclays card, that he intended to use to pay for the gas and his other purchases. Seeing the look on the cashier’s face, which doesn’t inspire any willingness to help, he struggles to “grease the cogs of his memory” until he remembers he can use the Barclays app to view his PIN. After inserting the card expiry date, he is able to see the code and leave the station, ready to fire up the engines.

“Cure PIN amnesia with a secure reminder. One of the useful features in the Barclays app,” says the voiceover at the end of the advert, adding the bank’s tagline, “Take control of your money”.

Barclays has been pitching other useful features in the Barclays app in previous adverts. One of them, aimed at highlighting that Barclays customers can use the bank app’s calendar to see when their bills and regular payments are due, features a young man in a restaurant who offered to pay for everyone else’s order close to payday. Another advert, focused on the users’ ability to lock and unlock their card at any time, features a woman on a bus who, unable to find her Barclays card, opens the mobile app and blocks the card so that no one could get near her money.

The Barclays Mobile Banking app also allows users to check their balance, make payments, send money, change their cash machine limit, earn cashback and rewards, and see them tally up, and more. In addition, the bank has announced that users will also have the choice to see current account balances and transactions from other banks in their Barclays app as part of a new feature that will be available soon.