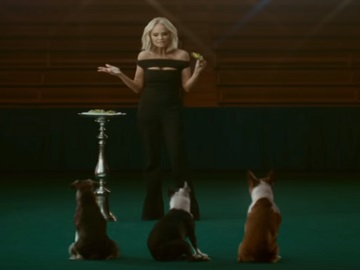 Avocados From Mexico has released a teaser for its Super Bowl LIII commercial, featuring a trio of dogs and Kristin Chenoweth.

The 15-second teaser, titled “Chorus,” opens with the dogs howling and Chenoweth telling them that they’re not doing it the right way because it’s supposed to sound differently. She then shows them how to do it by singing the Avocados From Mexico’s tune and urging them to hit those high notes. All this time, she’s holding some avocado toast in her hand.

Chenoweth, an actress and singer who has won both an Emmy and a Tony, is the first female celebrity to appear in the avocado marketer’s Super Bowl ad. This year, which marks the brand’s fifth consecutive appearance in the Big Game, the agency behind the creative was EnergyBBDO. The spot is set to air during the game’s second quarter.

This season, Avocados From Mexico will also promote dog adoption and a Sweepstakes called Anything for Avos, which began on January 22nd and ends on January 27th, 2019, and gives participants (who must be Twitter users) the chance to win one On-the-Go Travel Reward Card ($4,000) which can be used to book air travel, hotel and rental car and Avocados From Mexico for a year.