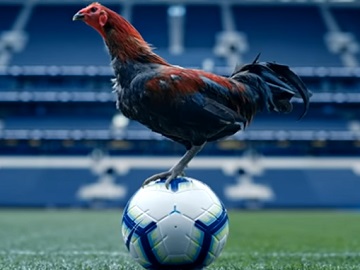 The spot opens with an overview of Spurs’ new stadium and with a voiceover raising the question “but with a shiny new stadium, how will the club and its players stay true to its values?”. The real-life version of the club’s cockerel logo, first introduced in a previous ad, which marked Audi’s first ad for Tottenham Hotspur sponsorship, makes then an appearance at the stadium, in the all-new Audi Q8. The driver opens the door for him and arranges his tie, always calling the rooster “boss”. The bird walks in and acts like a boss, sending Alderweireld to a press conference and stopping, later on, Llorente, who was hanging out with Alderweireld, Lamela and Walker-Petters, from stepping on the grass to take back a football.

“When everything changes, remember what you stand for,” the voiceover says at the end of the advert, which also sees the cockerel on the football.

The automaker became the official car partner of the English Premier League club, after signing, in August 2018, a four-year agreement with it. The partnership involves the automotive company’s four rings branding featuring across digital signage, including the LED advertising system, big screens and the interior TV network, at Spurs’ new stadium.