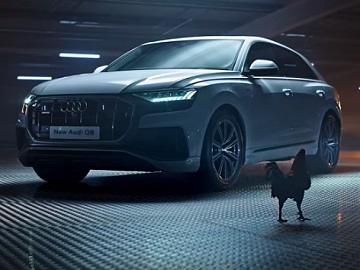 The spot shows the four professional footballers, who play for English Premier League club Tottenham Hotspur, on a studio set, taking a closer look at the Audi Q8 and apparently waiting to shoot an ad. Something strange happens, though, as the star seems to be someone else. Someone who it turns out is the real-life version of the club’s cockerel logo. The rooster shows up strutting down the room and, after outshining the top players and walking around the new Audi AQ, puts some of the car’s features to the test, including the hands-free boot feature, which is activated by a foot sensor to eliminate flapping, the Voice Control, which can only trigger navigation when activated on the steering wheel, and the Brake and Stop/Start button, which – as the automaker specifies, must be pressed together (by a human) to start the car.

The spot, which also sees the rooster getting at the steering wheel, as if he’s ready for a test drive, ends with the onscreen line “Dare to be different,” which is the campaign tagline.

The advert, created by agency We Are Social Sport, marks Audi’s first ad for Tottenham Hotspur sponsorship. In August 2018, the automaker signed a four-year agreement with the Enlish Premier League club to become its official car partner. This involves the automotive company’s four rings branding featuring across digital signage, including the LED advertising system, big screens and the interior TV network, at Spurs’ new stadium.