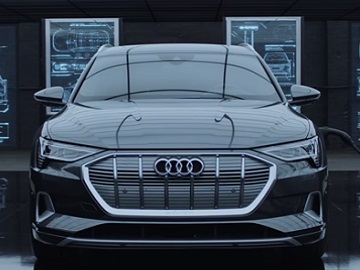 The spot, titled “The Debriefing,” stars Captain Marvel (played by Brie Larson) back in present day, after twenty years away from Earth, to help the Avengers battle for the fate of the universe. Walking down a corridor in an unknown location, in the company of a government agent, she enters a room where she gets debriefed in what she missed, from fads to food to tech, including the fully-electric Audi e-tron SUV. Thus, she learns that people are now eating guacamole on bread at twice the price, that cellphones went from big to small to big again and “now they let you video chat while turning your face into a puppy,” and gets to take the new Audi e-tron vehicles, which are “unlike anything you’ve seen before, all it needs is a quick charge”. After charging the car using her powers and getting at the steering wheel, Captain Marvel asks her cat, Goose, to buckle up and hits the road.

The end of the ad sees the tagline “Electric has gone Audi” flashing across the screen. Viewers are also informed that Marvel Studios’ Avengers: Endgame is now in cinemas.