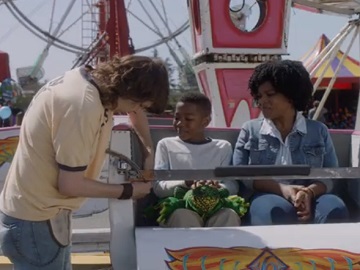 AT&T continues its “Just OK Is Not OK” campaign with a new installment.

This time, the spot is set in a street carnival and features a mother and her son getting ready for an amusement ride. The woman soon becomes worried, though, as the guy in charge with making all the necessary adjustments before the ride reveals he assembled himself, the night before, the improvisation system used to ensure their safety. “I think I did an OK job,” he also mentions, which causes even more worries for the lady, who can’t help but ask “Just OK?” Asked by the kid “What if something bad happens,” the guy answers they just move in the next town.

“Just OK is not OK. Especially when it comes to your network,” the voiceover says at the end of the commercial, adding that “AT&T is America’s best network according to America’s biggest test, now with 5G Evolution, the first step to 5G”.

The company also celebrates its status as proud partner of the NCAA Tournament in a series of new March Madness-themed ads, that also announce the arrival of 5G Evolution, the first step to 5G. The spots, created by agency BBDO, feature actors Mark Neely and Tim Baltz as announcers Ken and Phil, sitting courtside and doing their job.

Well, while Ken does his job well, not the same can be told about Phil, who’s a color commentator, but thinks his job is to actually comment on colors.