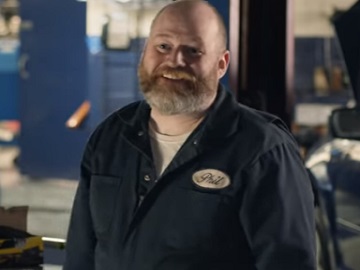 AT&T has released a series of new comedic spots to highlight that AT&T is America’s best network according to America’s biggest test.

One of them features a young man (played by Craig Frank) approaching a mechanic named Phil (played by comedian Tom Segura) and asking him if they are good with brakes. “We’re ok,” answers Phil, raising his shoulders. “Just ok?” the customer asks. “We got a saying here – the brakes don’t stop it, something will,” Phil says, which makes the customer reply that that’s not a real thing. “It is around here, I wrote it,” reveals Phil.

The commercial concludes with the voiceover saying “Just ok is not ok, especially when it comes to your network” and adding that AT&T is America’s best wireless network, according to America’s Biggest Test, now with 5G.
Other spots feature a couple who are about to leave their kids with a babysitter that’s “ok with kids” in theory, but doesn’t remember anything well about them, a patient who realizes that his surgeon is ok, a guy about to get a tattoo who realizes that the tattoo artist he came to is not one of the best in the city, as he thought, but only one of the tattoo artists in the city, and two couples in a restaurant who learn that the salmon they intended to order was actually not ok.