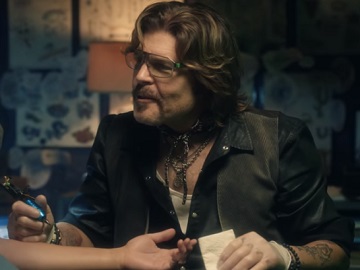 AT&T highlights, in a series of hilarious new ads, that AT&T is America’s best network according to America’s biggest test.

Rooted in the idea that, when it comes to wireless networks, just OK is not OK, the spots feature people in different scenarios, realizing that they’re in trouble. One of them shows a young man in a tattoo parlor, about to get himself a tattoo. The tattoo artist, played by actor Blake Gibbons, asks him if it’s the first tattoo and urges him to relax because “it’s gonna look ok”. “Only ok?” the customer asks. “Don’t worry, boss. I’m one of the tattoo artists in the city,” the answers the tattoo artist. “You mean one of the best tattoo artists in the city, right?” the customer asks again, willing to know that he came to the right guy for a tattoo. The reply (“Something like that”) doesn’t come as a relief, though. Seeing the artist ready to use the tattoo machine, the customer asks him if he wasn’t supposed to draw the tattoo first, but is soon inflicted by pain and another unexpected answer: “Stay in your lane, bro!”.

“Just ok is not ok, especially when it comes to your network,” the voiceover says at the end of the commercial, adding that AT&T is America’s best wireless network, according to America’s Biggest Test, now with 5G, and the tagline “More for your thing. That’s our thing”.