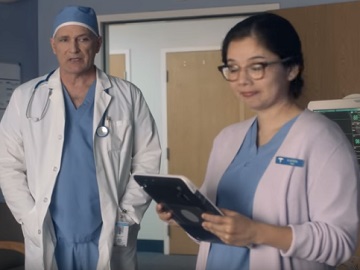 AT&T has released a series of hilarious new ads, aimed at highlighting that, “when it comes to wireless networks, just OK isn’t OK”.

One of them features a man on a hospital bed, surrounded by his wife and kids before a surgery. The woman asks the nurse standing by the bedside if she has ever worked with doctor Frances and thus she learns that the surgeon is, according to the nurse, “ok”. “Just ok?” the man asks a little bit worried. At this point, doctor Frances shows up, shouting on the hallway “Guess who just got reinstated?”. Entering the patient’s room, he confesses he was not officially reinstated and asks the patient if he’s nervous. Receiving an “Yeah” as an answer, doctor Frances reveals he’s nervous, too, but urges him to not worry about as they will “figure it out”. “I’ll see you in there,” he adds while walking out the room, referring to the surgery room.

“Just ok is not ok, especially when it comes to your network,” the voiceover says at the end of the commercial, adding that “AT&T is America’s best wireless network, according to America’s Biggest Test, now with 5G,” and the tagline “More for your thing. That’s our thing”.