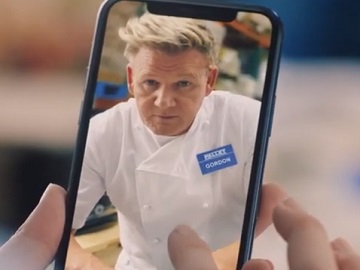 “Handing out free samples is just an OK use of Gordon Ramsay’s talent in a kitchen. Kind of like having an amazing new iPhone 11 or iPhone 11 pro, and using it on a network that isn’t AT&T.” This is the idea behind the latest commercial from AT&T.

The 30-second ad features a young couple in a cash&carry spotting the famous chef serving fee samples. Shocked to see him doing that, the man says this is a waste of Ramsay’s culinary talents, which makes Ramsay answer that this is like having a brand-new iPhone but not pairing it with AT&T. The man’s girlfriend, who’s an iPhone 11 user, agrees with him.

The end of the video sees Ramsay slapping the guy’s hand when he tries to grab one of the samples. “It’s not a buffet, use the cocktail stick,” he advises him.

“Get the most from your amazing new iPhone 11 Pro on AT&T, America’s fastest network for iPhones,” the voiceover says, adding the carrier’s tagline, “More for your thing. That’s our thing.”