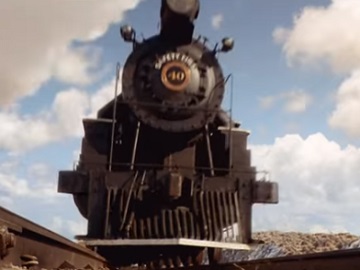 AT&T advertises its Unlimited Plans in a new commercial, highlighting that AT&T gives you more for your things.

The spot, directed by British director Dougal Wilson, features a scene from a Western movie, with a gang of outlaws putting explodable on a track, with the intention to rob the approaching steam train when it derails. The conductor tries to brake, but the inevitable happens – the vehicle derails. The derailed train turns, though, into a stop-motion animated scene with the cute railroad cars getting back on the track and performing a catchy song in the meantime. The bandits are also part of the film, but as cartoon figures, obviously.

“From Westerns to family films, you can get movies and more with AT&T Unlimited Plans” an onscreen line reads at the end of the video.

This is only the latest installment in the company’s “More for Your Thing” campaign, from agency BBDO, which debuted in the summer of 2018. Other similar cinematic spots also featured scenarios that switched from one genre to another, such as a rom-com that became a horror movie, a sports film that turned into a sci-fi thriller and an action film that turned into a musical.

Western scenes were shot in the northern Nevada Northern Railway, a railroad museum, and the animation part was handled by House Special, the Portland-based animation company of Paul Harrod, who worked as a production designer on the Oscar-nominated film “Isle of Dogs”.