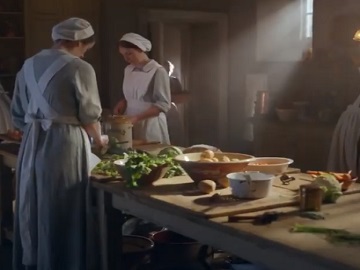 Asda urges people to “dine like Downtown without paying a king’s ransom” in its newest advert, that promotes the Butcher’s Select Large Beef Joint, now at $5.97 per kg (reduced from 6.99).

The 30-second spot, launched ahead of the Downtown Abbey film premiere, scheduled for September 13, opens with Mrs. Patmore coordinating work in the kitchen for a Royal Visit. After giving advice to the workers, she is seen rustling up a succulent joint of roast beef.

“When it comes to quality, you can rely on Asda,” the voiceover says toward the end of the video, adding that, with thousands of rollbacks, you don’t need to pay a king’s ransom.

The supermarket chain will also release other two shorter ads, that will showcase its range of branded family treats and will air throughout the autumn.