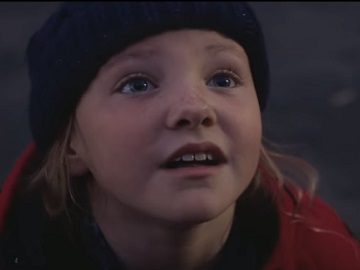 Asda has unveiled its Christmas 2019 advert, shining a light on the fact that holidays are made extra special by the people who go the extra mile to bring joy to those around them.

The 2-minute spot, titled “Let’s make Christmas Extra Special,” follows a young girl named Tilly who, after seeing the Northern lights, she comes up with a device made from various household items to catch some of those lights which she then sprinkles all over the town together with her brother, Jack. As they spread the lights, everything around transforms. First, a fully decked Christmas tree sprouts up from the ground, then other fantastical things happen: a man’s head transforms into a cheeky snowman head, a house turns into a gingerbread house, three locals waiting at the bus station turn into gingerbread men, the pavement is adorned by giant candy canes line and the streets are illuminated by elaborate lights.

When they return home, the two siblings realize the jar is empty but, while Tilly goes to sleep, Jack heads out again to refill it and spread some Christmas magic into her room, as well.

Serving as soundtrack is a live orchestral performance of “Lighting Up Christmas” composed by Rohan Stevenson and James Radford.

The advert debuted on Saturday night (November 2), on ITV.

Asda is not the first retailer to launch its Holiday 2019 ad, though. Argos was the one to kick off the Christmas ads season this year, with a spot that taps into the nostalgia of circling the wished gift into the Argos catalogue.