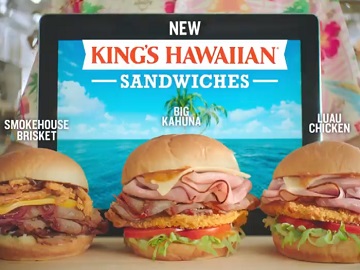 “What is this? Some kind of one-of-a-kind Hawaiian vacation?” a man’s voice is heard asking at the beginning of the 30-second spot dubbed “Isle of Buns,” which apparently features an exotic island. As the ad goes on, though, it turns out the island was actually a “sweet fluffy King’s Hawaiian bun” placed on a wooden chopping board against an exotic backdrop that was on a laptop. The King’s Hawaiian bun was used to make the chain’s new King’s Hawaiian Sandwiches – Smokehouse Brisket, Big Kahuna, and Luau Chicken. “This is how Arby’s does Hawaii,” the man, who reveals to be actor-comedian H. Jon Benjamin, presented as Arby’s Head of Sandwiches, says while standing in an Arby’s kitchen. When a colleague passing by asks if the island looked real, he says he doesn’t think so, adding “Mahalo for asking” (Mahalo means “Thanks” in English).

The three new King’s Hawaiian sandwiches will be available at participating locations for a limited time only.