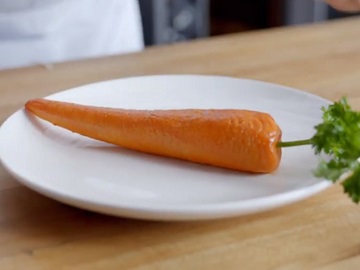 “If they can make meat for veggies (and other stuff), we can make veggies from meat,” this is what Arby’s states in its latest commercial, that introduces the first-ever Megetable: The Marrot.

The spot shows how this all-new item is made – a whole turkey breast is cut into the shape of a carrot, seasoned with salt and white pepper, wrapped in cheese cloth and plastic wrap and sous vide. The next steps consists in rolling the carrot-shaped meat in dried carrot juice powder and letting it rest for 15 minutes. Subsequently, it is oven roasted for an additional hour and then topped off with a fresh sprig of parsley to give it the full carrot effect.

“Plant-based meats are the latest incarnation of making vegetables look like what Americans really want, which is great, tasty meat,” Jim Taylor, Chief Marketing Officer for Arby’s, said. He also pointed out that 90% of Americans don’t eat the recommended amount of vegetables and revealed the question behind this new initiative: “So we said if others can make meat out of vegetables, why can’t we make vegetables out of meat?”.

For now, Arby’s is in the early stages of exploring the Megetables concept, and the Marrot will not initially be available to guests, according to a press statement.