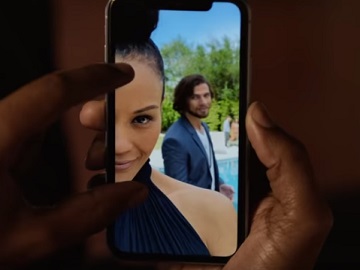 Apple showcases the Depth Control on the iPhone XS and iPhone XR in a new commercial.

Titled “Alejandro,” the 30-second ad opens with a young man who, looking at pictures of his life partner taken during the day, at an event, says it seems she had a good time. “I got a great shot of you,” he tells her, showing her the photo he’s referring to. Taking a look at the photo, she shows her boyfriend a colleague from work named Alejandro. “I told you about him, he’s so funny,” she says, starting to laugh. After zooming in and thinking for a second, the guy decides to use the Depth Control feature to make Alejandro get blurred. “That’s better,” he says to himself as he evaluates the final result.

The Depth Control lets users adjust the background blur after they take the photo. The feature, available in Portrait Mode, blurs the background of a photo so that the sharp subject (usually a person) stands out against it.

It uses the iPhone’s two cameras to create a 3D depth-map and allows users to adjust the amount of blur when they’re editing a photo, using a slider. To edit a photo with Depth Control, users must open up the Photos app and tap Edit at the top right corner of the screen. The new Depth Control slider appears below the photo or to the side, depending on how the iPhone is held.

This is not the first time the tech giant advertises this feature, available on its two flagship smartphones. The most recent spot shows, in a humorous, lighthearted way, that the Depth Control lets you adjust the bokeh effect on backgrounds before or after you shoot so you can turn a cute portrait of two kids into a stunning portrait of one kid.