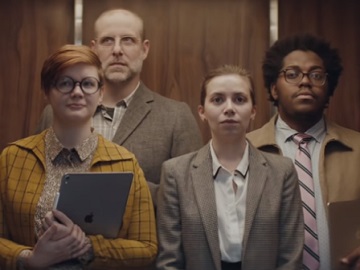 Apple has released a new 3-minute film showing you how Apple products help employees do their best work.

Titled “The Underdogs,” the ad features four colleagues at a corporation who have two days and once chance to pitch their idea to a top executive who’s never available for meetings. The group members are shown working all together, using various Apple products and services, to create a round pizza box. From brainstorming to dealing with design, prototyping and financials, they are doing it all and, at the end of the video, they are seen standing in the office elevator, waiting to take their presentation for review.

The circular pizza box featured in the ad is actually patented by Apple and exists at Apple’s campuses in Silicon Valley since 2017.