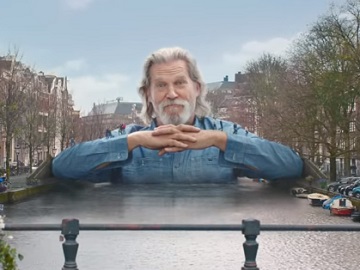 Jeff Bridges reflects on the power of bridges and how they bring people together in the latest advert for Amstel Bier UK, created by adam&eveDDB.

The 60-second TV spot, dubbed “Bridges on Bridges” and directed by Tim Godsal, features the actor as a gigantic human bridge in an Amsterdam canal, explaining how bridges often represent common ground for people to come together.

“Amsterdam, the dam, a city where togetherness is king. And why do you think that is?” the Hollywood legend asks in voiceover while on screen various people are seen on the streets and bridges of Amsterdam meeting up or riding bikes. The answer comes from the actor himself: “Bridges, man. And I should know because… you know, I’m Jeff Bridges.” He then goes on by saying that a bridge “is not just a physical structure that connects two places; they allow people to come together for common ground and bridge their differences”. Grabbing a huge glass of Amstel beer, he raises it to togetherness and so do many other people around him who are having the same beer. He’s also trying to say “Cheers” in Dutch, but – apparently – he spells the word wrong as someone corrects him. However, at the end, Bridges is seen toasting togetherness and saying the word (“Proost”) correctly.

The advert is part of a multi-million media campaign that is set to run from May to August 2019 across TV, cinema, VOD and digital channels. The marketing stunt will also include Amstel’s biggest ever in-store activations and a PR campaign centred around the role pubs play in bringing people together throughout the UK.