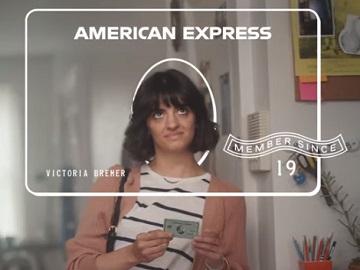 American Express relaunched its Green Card, which is turning 50, with attractive new benefits and, to celebrate the event and the new name – Green from Amex card – has dropped a new commercial.

The spot features a young woman who, after receiving her Green Card from Amex, starts enjoying the benefits it offers. Thus, she gets to buy the dress she had wished for, to pay for dinner when going out with her parents, to pay the bill when going out with her friends, to immediately get away from a date when the guy annoys her with his behavior, to travel and have a haircut, which doesn’t make her too happy, though.

“With you for the new, the now and whatever comes next,” the voiceover says at the end of the commercial, adding “This is Green from Amex”.

The Green Card, the most iconic card of American Express, which got a light redesign as part of the rebranding effort, has transitioned from a charge card to a credit card, now customers being able to carry over balances each month. Cardholders will be rewarded for regular expenses, like dining, transit and travel. More precisely, they will receive 3 membership points for each dollar spent on travel, transit and dining purchases and 1 point per dollar on everything else.

The Green Card from Amex also allows users to get through security faster at select U.S. airports and stadiums nationwide, to receive up to $100 per calendar year in statement credits, when they pay for their CLEAR membership, and more.

The Green from Amex card isn’t a game-changer, but the changes “do bring the card off the sidelines and into the conversation,” Julian Kheel, a senior industry analyst at The Points Guy, said.

The card’s annual fee has increased to $150 from $95. Foreign transaction fees have been dropped.