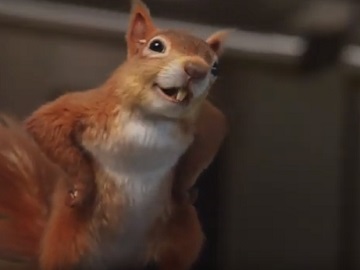 Amazon is known for encouraging people to donate a toy to Toys for Tots during the holiday season. This year, the e-commerce company has enlisted Robert Downey Jr to promote the initiative, as well as the new movie Doolittle, hitting theaters January 17, 2020.

The 30-second spot opens with Downey Jr’s character whistling to get his roommates’ attention. “Hey, what are we, a bunch of animals?” he asks his four-legged friends, who are making holiday cookies at the kitchen table. He then tells them they have to find an easier way to get into the holiday spirit, which makes Kevin the squirrel communicate – in his own language, obviously, his idea. The tiny guest asks Alexa to donate to Toys for Tots, but Doolittle points out that Alexa doesn’t speak squirrel. Doolittle then asks himself Alexa to donate to the charity and informs the animals they’re all going caroling. “I don’t sing with amateurs,” Kevin replies, making Doolittle start singing.

To donate, you just have to say “Alexa, donate to Toys for Tots” and Alexa will recommend an item appropriate for kids across a broad range of ages, for the Tots Charity List. After you confirm your order, Amazon will ship the toy directly to Toys for Tots. You can donate throughout the holiday season until December 31, 2019 and Amazon will match donations toy for toy. Moreover, the virtual smart assistant can provide tracking and delivery updates to let you know that your donation arrived once you confirm your order. Once the donation is confirmed, you will also receive a special thank-you message from Downey Jr.’s “Dolittle” co-star Craig Robinson.

Toys for Tots is a 71-year national charitable program run by the U.S. Marine Corps Reserve, which provides disadvantaged children with toys, books and other gifts during each Christmas holiday season. In 2018, the Marine Toys for Tots Program collected and distributed 18 million toys to 7 million less fortunate children in 800 communities nationwide.