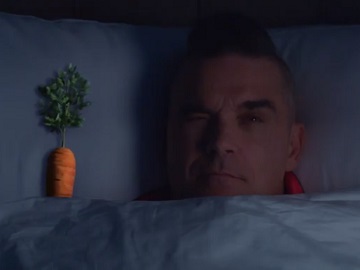 Kevin the Carrot and Robbie Williams have teamed up for a new Aldi Christmas-themed advert.

The spot features the singer lying in bed with his eyes closed and Kevin right by his side, on the pillow. However, when he tries to peek, his carot-shaped friend reminds him that he (Santa) won’t come if he doesn’t go to sleep.
“Merry Christmas to all our customers” an onscreen line reads at the end of the ad, which sees Santa’s sleigh up in the air.

In a previous advert for the British retailer, the artist performs a festive version of one of his most famous tracks: Let Me Entertain You.

This year marks Aldi’s fourth consecutive Christmas campaign starring Kevin the Carrot, a character whose popularity grew every year. “We’re all thrilled to see Kevin back on our screens again, getting up to his usual tricks,” Sean McGinty, marketing director at Aldi UK, said in a press statement, mentioning that “Kevin’s magical big top is the perfect environment to showcase the amazing quality of the Aldi Christmas range of food and drink this year”.