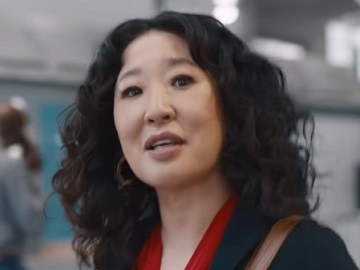 Air Canada has teamed up with Sandra Oh to “help bring the world a little more Canada, one apology at a time”. The Killing Eve star features in a 90-second commercial that highlights what traveling like a Canadian means.

“When you travel with Air Canada, it’s as if you’re traveling like a Canadian,” Oh says in the opening of the spot, inviting then viewers to see some of the things she does to help bring the world a little bit more Canada.

“Travelling like a Canadian means you’re a beacon of peace in turbulent situations,” she also says, illustrating this idea by making two sisters that are fighting stop for a moment and share a bowl of poutine. The actress also points out that traveling like a Canadian means sharing customs with other travelers and trying new things and that it also means “being respectful to everyone and embracing all cultures”.

The commercial features her in the airport, on the way to her flight, getting into a “sorry fight” with a woman, with whom she then pronounces things like “Loonie-Toonie,” “ketchup chips,” and “bagged milk,” as well as on the plane, in the shoes of a cabin crew member who speaks French and is greeting passengers in their own language, even if their language is a hello that includes no words, but complicated handshakes and moves.

“So no matter where you’re going, whether you’re a Canadian or not, traveling like one can bring the world a little closer,” Oh says toward the end of the commercial, which sees her telling a passenger that he is in her seat. When the man says “sorry,” she looks surprised at the camera and says “Very Canadian”.

“Travel Like a Canadian” an onscreen line reads at the end of the commercial, along with the airline’s new hashtag, #TLC.