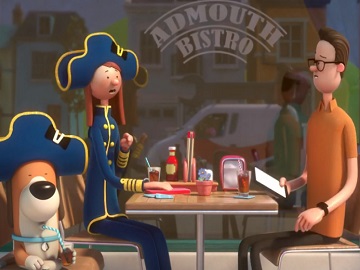 The 40-second animated spot features the company’s spokeswoman and her dog approaching George, a young man who, in his attempt to turn off his heating at home with just a tap, using his smartphone, while enjoying a cup of coffee at the Admouth Bistro, manages to cause some serious damage to his cars, fence and house. “Life shouldn’t be so complicatedm” thinks the Admiral, according to the voiceover, who’s also revealing that, luckily, George has Admiral MultiCover – car and home insurance all in one place. “What could be simpler?” he asks, while on screen a worker is featured arriving at George’s place to fix the problems.

Founded in 1993 to specialise in Car Insurance, Admiral was the Best Car Insurance Provider 6 years in a row, from 2014 to 2019, according to The Personal Finance Awards. In 2005, the company launched a new product designed to help people with two or more cars get a better deal, called MultiCar Insurance. Among its other insurance policies are home insurance, van insurance, travel insurance, car sharing insurance, breakdown cover, motorbike insurance, classic car insurance, gap insurance, learner insurance, and pet insurance.

Admiral informs that can add all of your cars to your MultiCover Insurance and each driver builds up their own No Claims Bonus. With your car and home insurance combined, all of your cars and home will renew at the same time on the same date so you don’t have to worry about separate policies and renewal dates.