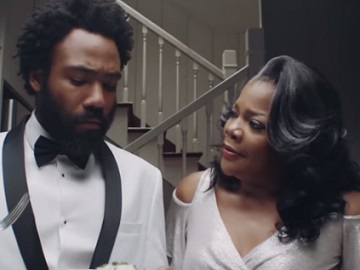 adidas Originals has teamed up with the “Atlanta” star Donald Glover for a series of short films that explore well-worn sneakers as a symbol of life’s experiences.

The campaign marks the launch of the limited-edition Donald Glover and adidas Originals collection, slated for April 26th. and includes five videos featuring the American actor and comedian and executive producer Mo’Nique, aimed at emphasizing the message of beauty and value in worn-in sneakers. One of the films, dubbed “Polenta,” shows Glover and Mo’Nique dressed to the nines, in the kitchen at what appears to be some Hollywood event. Mo’Nique is heard complaining, saying she can’t do it with “this bougie food and these fancy things” and that she’s gonna need some real food. She then grabs a “pickled daikon glaze” from a plate and throws it away. The item ends up on Glover’s sneakers, the Nizza DG Shoes from the collection. He makes it “go away” by moving his leg and keeps listening to Mo’Nique, who starts to criticize the Japanese polenta that’s on the menu. She then hands over to Glover a plate with a dish for him to try it. “I know your Hollywood ass ain’t had no food with seasoning in a while,” she tells him, adding that he’s been “out there partying, talking politics with Oscar Isaac, and eating vegan sushi”. “The viscosity on this is amazing,” he says after taking a bite.

“How’d you do that with just butter?” Mo’Nique then makes fun of him for remarking upon “the viscosity” of her dish.

In a statement from adidas, Glover said “Rich is a concept. With this project, I wanted to encourage people to think about how their stories can be told on their feet. Value isn’t quantified by what you wear, rather the experiences from them”.