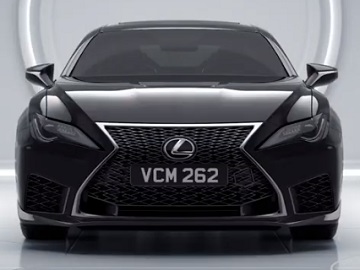 Lexus has released a new commercial, showcasing the 2020 Lexus RC F, which is featured in Columbia Pictures’ upcoming movie Men in Black: International.

The 30-second ad, from agency Team One, includes scenes from the film and shows Chris Hemsworth (who’s playing Agent H) and Tessa Thompson (who’s playing Agent M). “The Men in Black demand only the best – suit, tie, shades, weapon and ride. When you’re protecting the Earth from the scum of the universe, a little extra horse power never hurts,” the voiceover says, while on screen the two agents are seen unveiling the 2020 Lexus RC F and hitting the road.

At the end of the video, as the duo are driving away through the night down the city streets, the voiceover urges viewers to “experience the performance and refinement of the 2020 Lexus RC F in Men in Black: International,” which hits theaters June 14.

Lexus cars and vehicles are the official fleet of Men in Black agents globally in Men in Black: International. The Lexus RX Hybrid and Lexus LX SUVs are also featured in film scenes with alien encounters.