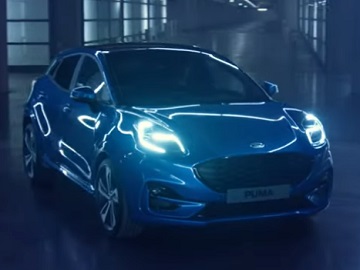 Ford UK has unveiled the 2020 Ford Puma, which will sit between the EcoSport and the forthcoming new Kuga in the brand’s SUV line-up.

The automaker has also released an advert, giving viewers a glimpse at the small SUV, which made its official debut.

The car features at the front Ford’s distinctive grille, headlights high up on the bonnet, an interior that boasts SYNC3 infotainment system, a digital display for the dials and, on some models, massaging front seats, front and rear seats with zippable covers. The Ford Puma also has a hands-free tailgate and a boot with capacity of 456 liters.

Set to arrive in early 2020, the vehicle will be offered in three models – Zetec, Titanium and ST-Line – and will be powered solely by Ford’s 1.0-liter, three-cylinder petrol engine, paired with a six-speed manual gearbox.