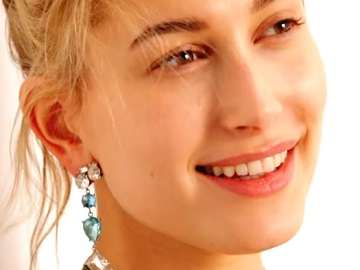 The American model and actress, voted “World’s Sexiest Woman” by Maxim in 2017, showcases pieces from the new collection in a 30-second ad, shot in LA by German fashion photographer Katja Rahlwes.

Among the items she’s wearing are the Rocky creased bag in red, a military-inspired jacket featuring exclusive Zadig & Voltaire patches, a white T-shirt, black denim mini shorts featuring an unfinished hem, which are accessorized with a colorful scarf for one of the outfits, parga mix pants in camouflage print cotton, two-tone stonewash, inspired by the military wardrobe, and others.

Hailey Baldwin has fronted multiple campaigns in the past years for several brands. In 2017, she fronted the new adidas x JDSports A/W 2017 campaign, H&M’s Denim Days campaign, in 2016 she starred in a campaign for Guess. Tommy Hilfiger, Sonia Rykiel and Moschino are other brands she collaborated with. Earlier this month, on Monday, February 12, the gorgeous supermodel walked Zadig and Voltaire NYFW show, where the fashion house presented its Fall Winter 2018 range.

Zadig & Voltaire Spring/Summer 2018 Collection is available for purchase at the brand’s website.