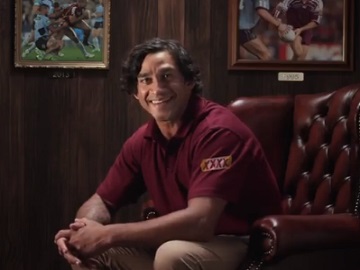 XXXX celebrates three decades of rivalry and 21 series victories by replacing the four iconic red X’s on its cans, stubby crowns, and cartons with its favourite Maroons Origin Series. The brand has released a new commercial starring Johnathan Thurston, inviting viewers to “Taste the Glory” with the Queensland Maroons and showcasing the Taste the Glory special edition pack.

“Twenty one Maroons series victories. Man, twenty one! With so many epic wins, how do you choose a favorite? It’s like picking a favorite child. You’ve definitely got one, you’re just not allowed to say it,” the captain of the North Queensland Cowboys in the National Rugby League says on the 30-second spot, laughing and apologizing for the joke. He then continues by informing that the team at XXXX have narrowed it down to their favorites. “To show our unconditional committement to the mighty Maroons, we’ve swapped the four iconic red X’s on our cans and cartons to create six special edition cans, so you can literally taste the glory,” he adds, asking “What’s your favorite Maroons series win? Is it one from the early days? Or maybe something a little more recent?”.

Finally, Thurston encourages people to grab the special edition of XXXX to show their support for the Maroons, adding “Let’s make 2018 another series to remembers!”.