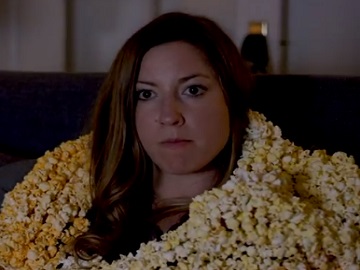 The Popcorn Blanket is presented, in a 20-second ad, as “beautiful kernels popped to circular perfection and woven with the smoothest of butter.” “You won’t believe it until you eat it,” the voiceover says, while on screen a woman is seen watching a movie on the coach, curled up with a popcorn blanket which she slowly eats.

“Xfinity Minivations. Tiny tech to better your binge.” the voiceover adds at the end of the commercial.