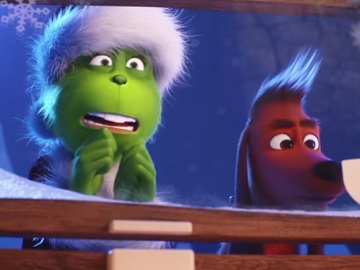 The fictional character created by Dr. Seuss is seen dressed as Santa in the company of his trusted canine, Max, trying to get in someone’s home with the intention to take the Christmas tree down and steal the presents. While opening the window, he hears an alarm and, spotting “the red sticker” (that reads “Secured by Xfinity Home”), decides it’s better to run away. It’s too late for him, though, for the householder received a text notification informing him that the front window was opened. Taking a look at the images captured by the front surveillance camera and recognizing The Grinch and his four-legged companion, the man invites him over for a cup of cocoa, which is obviously not a delighting idea for the green creature whose intention was to ruin the guy’s Christmas.

“Prevent The Grinch from ruining your holiday season with Xfinity Home,” the voiceover says at the end of the 30-second spot, urging then viewers to see The Grinch in theaters.

The telecommunications company is the latest to promote The Grinch movie in its advertising campaign. Earlier this week, Honda also promoted The Grinch in a commercial heralding the automaker’s Happy Honda Days Sales Event. The Grinch stole, though, the event, after taking over a Honda dealership and making sure there will be “no decorations, no deals and no donuts, no surprisingly comfortable chairs, no discounts, no firm handshakes, no exciting test drives, and no cars”. Among the things he does is also a poster that reads “Unhappy Honda Days Sales Event”.

Personal genomics and biotechnology company 23andMe, based in Mountain View, California, has also promoted the new animated comedy Christmas movie in a commercial that encouraged people to give the gift of a DNA kit from 23andme.com this holiday season. The spot featured The Grinch eager to find out “what all this DNA kit fuss is about” and discovering his DNA story. IHOP has also celebrated The Grinch movie with a new Grinch-inspired menu, which includes all-new Grinch green pancakes with cream cheese icing and a new mint hot chocolate with green whipped topping. A commercial released by the pancake house showed a man describing the thief who stole his Grinch green pancakes and, judging by the resulting sketch, it was none other than The Grinch himself.

Based on the 1957 Dr. Seuss book “How the Grinch Stole Christmas!”, The Grinch, also known as Dr. Seuss’ The Grinch, was directed by Yarrow Cheney and Scott Mosier and features the voices of Benedict Cumberbatch, Rashida Jones, Kenan Thompson, Cameron Seely and Angela Lansbury. According to the official synopsis, The Grinch hatches a scheme with his trusted canine Max to ruin Christmas when the residents of Whoville plan to make their annual holiday three times bigger that year. Meanwhile, Cindy Lou Who plans to seek out Santa Claus to thank him for helping her widowed mother every Christmas, but little does she know she is trying to blow the Grinch’s cover.