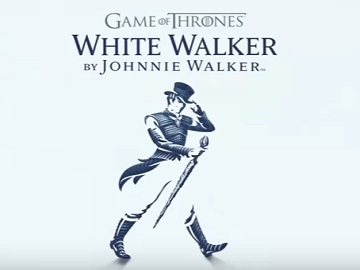 Johnnie Walker advertises its new White Walker limited-edition Scotch whisky, inspired by the enigmatic characters of the same name on HBO’s hit show Game of Thrones, in a new spot.

“From far beyond the wall comes a whisky for those who face the oncoming storm and never stop walking. Winter is here.” the voiceover says on the 15-second spot, which features a mountaineous landscape, with crows flying up in the sky and snow falling, and the silhouette of an enigmatic character riding a horse.

Created by whisky specialist George Harper, alongside the small team of expert blenders at Johnnie Walker, this limited-edition whisky has notes of caramelized sugar and vanilla, fresh red berries with a touch of orchard fruit and features Single Malts from Cardhu and Clynelish, one of Scotland’s most Northern distilleries. The bottle features an icy white and blue design along with the iconic Johnnie Walker Striding Man, now fashioned in armour to fit in among the ranks of the Night King’s forces. It also features temperature-sensitive ink technology, that will show an unexpected graphic icy reveal, when frozen.

White Walker by Johnnie Walker Limited Edition will be available in select global markets in stores and airports starting this month.