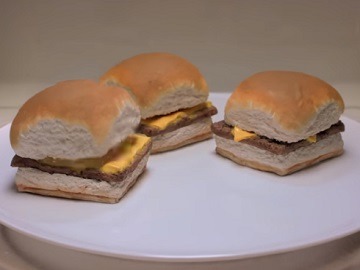 Titled “Our Own Restaurant”, the ad features three White Castle cheeseburgers on a plate in a microwave having a conversation. One of them tells his fellows he’s just had an amazing idea, namely they should open their own restaurant and serve sliders that taste just like them. “That’s sheer genius!” says one of the sliders, adding “we’re going to be famous!”. The third slider reminds them, though, that there are already White Castle restaurants, mentioning that customers get the same taste in the microwave as in the restaurant.

The commercial ends with the voiceover saying “Same original taste everywhere. White Castle Sliders – What you’re craving is in your freezer,” while on screen the White Castle range, including The Original Slider, made with 100% beef, Jalapeno Cheeseburgers and Hamburgers are shown.

According to the hamburger restaurant, its burgers are made from 100% beef, with zero additives or fillers. The White Castle sliders, which are “steam-grilled over savory onions to create the hot, tasty flavor you crave,” can be enjoyed in restaurants with sides like French or Cheese Fries, Onion Chips/Rings, Chicken Rings, Mozzarella Cheese Sticks, Fish Nibblers, and various beverages, from assorted Coca-Cola products to coffee and milk.

The White Castle Original Sliders are available in over 400 restaurants and local retail stores across the country.