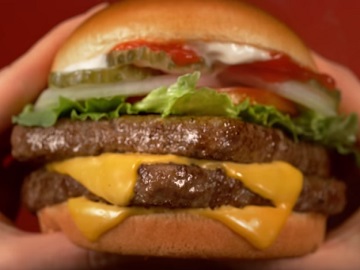 “Here’s a not-so-hidden gem on McDonalds.com.” – a first onscreen line reads at the beginning of the 30-second spot, created by VML and titled “Iceberg”. The ad pulls copy directly off of McDonald’s website “‘Our beef is… FLASH FROZEN to seal in fresh flavor'” (which and goes on by saying the following: “The iceberg that sank the Titanic was frozen, too. (Just sayin’.) Anyway, we’re not fans. We only use fresh never frozen beef on every hamburger every day. So they’re hot, juicy, and made when you order. Skip the hamburgers at the Frozen Arches. Head to Wendy’s and try a Dave’s Double so you can taste the difference for yourself”.

In 2017, Wendy’s Super Bowl commercial, which marked the first time a Wendy’s Super Bowl commercial aired in 50 years, also touted the “fresh, never frozen” beef used at Wendy’s by hinting at the fact that their competitors use frozen beef, instead. The spot featured a massive frozen beef storage unit labeled “Othr Guys LLC”. Wendy’s took another jab at McDonald’s, in March 2017, when the latter announced on Twitter their Quarter Pounder burgers will be made with fresh beef in “most” of their restaurants, by replying “So you’ll still use frozen beef in MOST of your burgers in ALL of your restaurants? Asking for a friend”.

Wendy’s commercial with run during the first quarter of the Big Game, which on Sunday, February 4, on NBC.