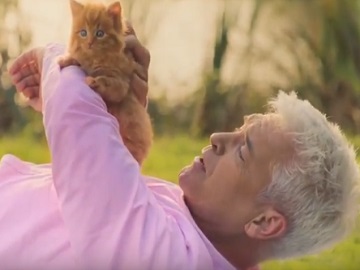 Phillip Schofield stars in two new webuyanycar.com adverts, sharing, this time, his personal Phil-osophy that “every second counts” and that you should “value your free time”.

“Phillip Schofield here. I’m a firm believer that every second counts and with webuyanycar.com you could find out how much your car is worth in under 60 seconds. Then you can get on with the rest of your day like I’m doing here,” the company’s spokesman says on one of the 30-second spots, while on screen he is seen playing with an adorable kitten (the one he saved from a tree in a previous ad) in the middle of nature. “And what a great day that was,” he adds, recalling the special moments spent with his little furry friend. He then advises viewers willing to find out how much their car’s worth in 60 seconds to enter their reg number at webuyanycar.com.

The other spot features Schofield doing the same thing, namely playing and caressing the kitten, while his voice is heard in the background urging viewers to sell their car with webuyanycar.com, highlighting that, even though selling privately would result in getting a bit more money, it would also be extra hassle. “Wouldn’t you rather get on with your day, like I’m doing here?” he asks, referring to him spending time outdoors, with his pet.

The campaign starring the “nicest man in Britain” – as Schofield as been named – debuted on 8th December 2017, with an advert created by agency Brothers and Sisters and directed by Andrew Gaynord. The campaign includes several spots featuring the much-loved celebrity in a series of situations that illustrate him as a friendly man with the people he meets in his daily life and willing to help them solve all kind of problems, including rescuing a kitten from a tree.