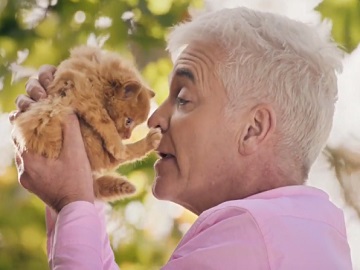 The 30-second spot features Schofield, who is a TV presenter, currently employed by ITV, showing up in a neighborhood carrying a ladder to save a kitten from up a tree. His kind act comes along with another request, from a young boy: to save another kitten, that is on the roof of a church. “Oh, Phil! Phillip Schofield rescuing a kitten from up a tree. Love him! Webuyanycar.com can never be as lovely as you, Phil, but our customers did give us a 9 out of 10 score on Trust Pilot, so we’re getting there.” – the voiceover says, asking then “When will it ever end, Phil?” while Phil is seen looking at the other kitten that he’s asked to save. “Up you pop!” – encourages him the voiceover at the end of the spot.

The ad is part of the #SoSchofield series, depicting the “nicest man in Britain” in a variety of situations in which he is being nice. The campaign starring Schofield, which marks the first work of agency Brothers and Sisters for webuyanycar.com, debuted in December 2017.

Founded in March 2006 by Noel and Darren McKee, We Buy Any Car Limited is an used car purchaser headquartered in Middleton, Greater Manchester, United Kingdom, but it also has branches in the United States, the Netherlands and Germany.