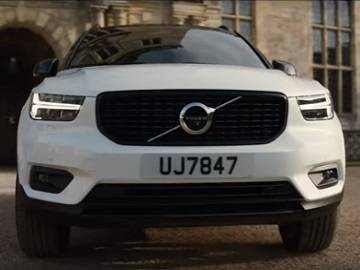 Volvo showcases the XC40 in a new commercial, highlighting that the SUV appears in the new Tomb Raider film, set to hit cinemas March 16th.

“Some are born to change the world. Others are born to save it.” the voiceover says at the beginning of the 30-second spot, which features Alicia Vikander’s character, Lara Croft, getting out of a Volvo XC40. “You messed with the wrong family!” she answers to a man who tells her “You shouldn’t come here.” Additional scenes show the places she goes and the challenges she faces, before the voiceover adds “The new Volvo XC40 as seen in the new Tomb Raider movie”.

The upcoming Tomb Raider film, based on the 2013 video game of the same name and directed by Roar Uthaug, follows Lara Croft, the “fiercely independent” daughter of a missing adventurer as she embarks on a journey that tests her limits to find the mystery behind her father’s disappearance.

Recently unveiled to the world, the new Volvo XC40 is, according to the automaker, “a vehicle that’s unlike anything you’ve experienced before.” thanks to its bespoke design options, smart storage solutions and high-tech interfaces. Among its key features are Pilot Assist, which automatically maintains a steady speed and distance to the car in front, and even helps steer the car, keeping you within lane markings, intelligent all-wheel drive technology that provides extra traction, with minimal increase in fuel consumption or emissions, Run-off Road Mitigation system, which uses steering input and, if necessary, brake support to guide the driver back on track if it senses that they are about to leave the road unintentionally, easy-to-use center touch screen to the high-resolution driver display and voice control that understands normal speech, a unique air-ventilated woofer that delivers precise, powerful sound. Optional features include a panoramic roof, Harman Kardon Premium Sound audio system, and others.

The 2019 Volvo XC40 trims include Momentum, described as “a proud expression of city style, where smart features and contemporary design interact to create a confident and bold look”, and R-Design, described as featuring a “sporty design in every detail, inside and out”.