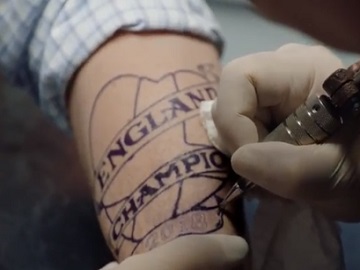 Volkswagen UK celebrates its status of proud sponsor of ITV’s coverage of this summer’s football in a new campaign, titled “Complete Confidence”.

The campaign, which coincides with the reveal of the name of the new member of the Volkswagen SUV-Family, includes three 10-second spots, featuring a football fan who has complete confidence in England’s team. One of them shows the man, who is a Volkswagen SUV driver, at a tattoo shop, having his arm tattooed with the message “England Champion 2018.” When the tattoo artists suggests to leave 2018 blank for the moment, the customer asks “Why?” as if he sees no reason to do so.

Another spot features the same man looking at his reflection in his VW SUV’s window as he moves the England team’s logo on his clothes in an attempt to find the perfect place for the tattoo. This activity is interrupted by his wife, who lowers the window and asks him “Can we go now?”.

Finally, a third spot sees the man standing in front of the tattoo shop and talking about the regrets he has, revealing that his only regret would be that he didn’t get a bigger one.

The campaign coincides with the reveal of the name of the new member of the Volkswagen SUV-Family, the T-Cross.

Klaus Bischoff, Head of Design, revealed the name and an official drawing of the small SUV. The Volkswagen T-Cross is expected to launch next year.