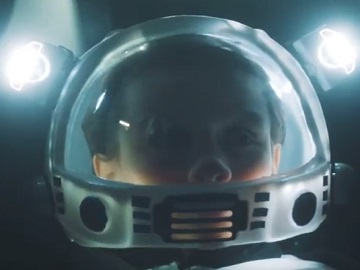 Volkswagen advertises its Passat GTE in a new ad, aimed at highlighting that “E-cars are here to save the world and the Passat GTE has acceleration that’s so exciting it’s like something out of this world”.

The 30-second spot features a little boy wearing an astronaut costume and his dog, equipped with a special space suit, as well, running down the stairs and into the garage, to get into the back seat of a VW Passat GTE. As the car’s engine and the Boost Button is pushed by the driver, the line “Acceleration that is out of this world” flashes across the screen.

This hybrid plug-in features a 1.4 TSI turbo petrol engine with cylinder deactivation, joined by an 85kW electric motor and 9.9 kWh lithium ion battery pack. With combined power is 215bhp and a a six-speed twin-clutch DSG gearbox, the GTE reaches a 0-62mph time in 7.4 seconds.

Besides the full electric mode and full hybrid setting, there is also a GTE mode, which adjusts the car for sporty driving.