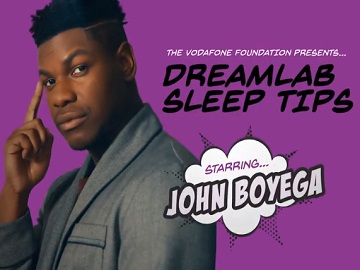 Vodafone UK has teamed up with John Boyega to advertise DreamLab, a free app developed by the Vodafone Foundation, which “harnesses the processing power of your smartphone while you sleep to crunch vital medical research data and help to speed up the fight against cancer”.

In a 30-second video recently released by the mobile carrier, the Star Wars actor shares some top tips to help DreamLab users to #SleepLikeaHero. Keeping the bedroom cool, relaxing your body for a stress-free sleep, keeping your body warm (wearing socks, for instance, like John), having a warm drink before bed (as it eases hunger pangs), and hitting the sack early are the five tips illustrated by Boyega.

“While you sleep, your phone and DreamLab are helping in the fight against cancer” an onscreen line reads at the end of the spot, which also urges viewers to download the DreamLab app and #SleepLikeAHero tonight.

According to Vodafone, the DreamLab works when your phone is charging and connected to the internet, enabling it to “form part of a secure virtual super computer made up of thousands of other phones capable of running billions of complex calculations.” The more people using DreamLab, the more processing power will be available and that means cancer research projects can be completed faster. It works on Wi-Fi or mobile data, is available to all UK mobile users and it won’t eat into your data allowance if you’re a Vodafone UK customer.