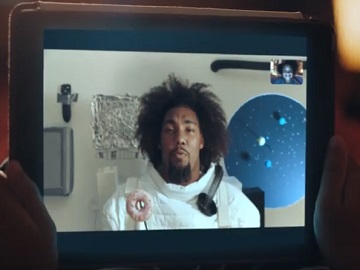 Leonard Williams star in a new VISA commercial, aimed at highlighting that VISA helps your money keep up.

The spot features the Jets defensive end on a shopping trip that includes lots of purchases, from a white kids’ jacket to a fish bowl and many more. After paying with his Contactless VISA card, Williams returns to his hotel room, in Chicago, where he gets dressed like an astronaut and starts a Face Time conversation with his daughter, to catch up with her and tell her Good night.

“You want to stay close to home, even when you’re away. We help your money keep up.” the voiceover says at the end of the spot, which also celebrates the company’s status of proud sponsor of the NFL.

Leonard Williams is only one of the NFL stars that appeared in VISA commercials. New Orleans Saints quarterback Drew Brees, New York Giants quarterback Eli Manning, New England Patriots tight end Rob Gronkowski, Atlanta Falcons wide receiver Julio Jones, as well as a variety of other athletes, have also advertised VISA’s products, services, and initiatives, including the “We’re All on the Same Team”, which encouraged people to join VISA in providing aid to hurricane victims in the Gulf Coast by donating to the American Red Cross.