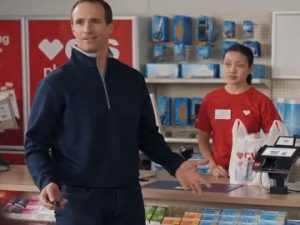 VISA has released a new ad, informing that now you can pay with VISA at CVS.

The 30-second spot features the legendary quarterback Drew Brees paying for his products with VISA contactless and being praised by a man for that. “Drew Brees, what you just did with that VISA card is the most amazing thing I’ve ever seen you do,” the “fan” tells him. “But I won a Super Bowl,” Brees answers. “But you didn’t do it so quickly,” replies the “fan,” who is backed by a woman that reminds Brees that it took him three hours to win the Super Bowl. “That’s how long a game takes,” argues Brees. Another customer then says that that kind of speed could help with his career and asks him if he can pay again that fast, so that he could take a photo. “He just did it again, like it was nothing,” the first man says excited, which makes Brees a little embarrassed. He manages to say “Thanks, guy!” before leaving.

The commercial ends with the voiceover announcing that now you can tap to pay with VISA at CVS and saying the brand’s tagline, “VISA. Everywhere You Want To Be”.

Drew Brees is only one of the NFL stars that appeared in VISA commercials. New York Giants quarterback Eli Manning, Jets defensive end Leonard Williams, New England Patriots tight end Rob Gronkowski, Atlanta Falcons wide receiver Julio Jones, as well as a variety of other athletes, have also advertised VISA’s products, services, and initiatives, including the “We’re All on the Same Team”, which encouraged people to join VISA in providing aid to hurricane victims in the Gulf Coast by donating to the American Red Cross.