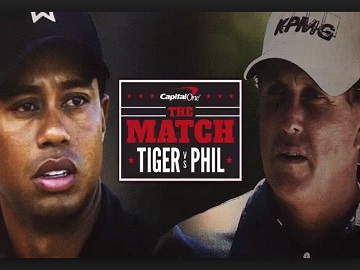 Verizon encourages people to watch Tiger Woods and Phil Mickelson making history on November 23, at Shadow Creek in Las Vegas, as they face off in a head-to-head, 18-hole match.

“The Match” between the two golfers, who are among the greatest golfers ever, is the first to be pay-per-view, going the route of boxing and MMA and will also feature in-match wagers between the two competitors, an added element of intrigue never before seen in professional golf.

“The Match” will cost $19.99 to buy on pay-per-view, and it will also be broadcast by Turner’s B/R Live, AT&T’s DIRECTV and AT&T U-verse. It can also be found on other cable, satellite and telco operators including Comcast, Charter, Cox, and Altice in the U.S. and Rogers, Shaw and Bell in Canada through In Demand and Vubiquity (an Amdocs Company). Live coverage of the pay-per-view will begin at 2 p.m. ET, 11 a.m. local time. The winner will take a prize consisting of $9 million.

The commercial released by Verizon includes footage of Woods and Mickelson in other matches, as well as them talking to the camera. “This is something that people will remember,” says Woods, whose statement is followed by Mickelson saying “Tiger and I both desperately want to win”.

The song used in the ad is “Golden” by American alternative hip hop group Jurassic 5, from their third studio album, “Power in Numbers,” released in October 2002.