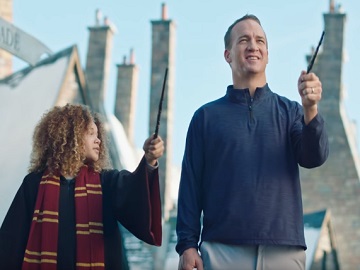 Peyton Manning is a Vacation Quarterback in the commercial developed by Universal Studios Hollywood for this year’s Super Bowl.

The former NFL quarterback is seen coaching a family during their trip to Universal Orlando Resort and Universal Studios Hollywood so that they could get the most fun out of the experience.

The spot, available as 30- and 60-second versions, opens with Manning giving the family a pep talk: “This is your moment. You are more than a team. You are a family. Now let’s get out there and play.” and goes on with them enjoying a variety of activities. Throughout the day, while they are visiting all kind of attractions, Manning keeps giving pep talks and pieces of advice. “I’m gonna need all of you to push your vacation and give 110%.”, “Fear is never an option.” – are only some of his lines. However, in the Harry Potter section of the park, he proves to be “un-coachable” as a girl in Potter attire describes him seeing that he can’t get the hang of a magic wand.

“The off-season is on, so take your vacation game to the next level.” – the voiceover says at the end of the spot.