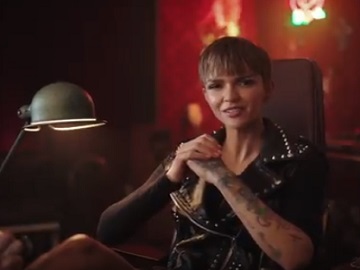 UberEATS continues its “Tonight I’ll Be Eating” campaign, aimed at promoting the mobile app in Australia, with a new installment, starring Ruby Rose and Rebel Wilson.

The spot features Ruby Rose as she’s getting a new tattoo to match her Mexican feast, ordered through Uber Eats and consisting of tacos with sauteed vegetables and pickled jalapenos. The tattooist doing the inking, who it turns out is the Pitch Perfect star Rebel Wilson, reveals she will be eating ham and pineapple pizza with extra pineapple and maybe a salad. She then informs Ruby that she has just tattoed a taco on her leg and, confronted with a reaction of shock, suggests Ruby could wear full-length pants for the rest of her life and comes up with the idea of tattoing a burrito on another part of her body.

UberEATS “Tonight I’ll Be Eating” campaign, created by Special Group and The Glue Society and launched in 2017, also features Naomi Watts, Boy George, Sophie Monk, Ryan Kwanten, Peter Fitz Simons, Nic Naitanui, and Ryan Moloney, all sharing with viewers what they are having for dinner.

Uber has partnered, so far, with thousands of restaurants, who collectively offer more than 150,000 different menu items to Australian consumers through the UberEATS app.